Parodies: The siren song of the community.

Creeperbane2 Victorian ScoundrelIndianapolis, IN Icrontian
November 2012 in Minecraft
Minecraft and parodies, it goes without saying these two go hand and hand, and in marriage with the juggernaut YouTube they have become a sensation. These parody songs put up extreme numbers upwards of 14,000,000 views or more. many Youtubers and YouTube communities such as Captain Sparklez and The Yogscast have made quite famous parodies of well known songs and become just about as well known.
For example the Yogscast's "Screw The Nether" a "Moves like Jager" parody about the dangers of staying in the Nether for longer than absolutely necessary.
http://www.youtube.com/watch?NR=1&feature=endscreen&v=gqELqRCnW6g

Or Captain Sparklez's famous parody of "Viva La Vida" he calls "Living in a fallen Kingdom" which is a song about a great king whose kingdom falls after being under attack by the dread forces of Herobrine leaving him feeling useless and wondering why he survived.
http://www.youtube.com/watch?feature=endscreen&NR=1&v=I-sH53vXP2A

And just to be keeping people up to date here is one of the most recent releases, a parody of PSY's Gangnam Style that he calls "Minecraft Style" I personally have NO idea what this one is about but it has creepers wearing wigs, endermen driving boats, and a dude getting slapped by an iron golem. 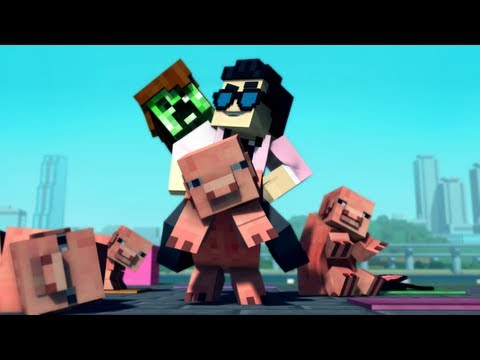 So what are you waiting for guys, check them out. And Happy Thanksgiving should that be the day you read this.