Real talk - Nier Automata is awesome, and you should play it. As far as I'm aware, this is the first time the game has been on sale since launch. Trust me, it's worth every penny, and you should buy it now: http://store.steampowered.com/app/524220/NieRAutomata/

Now, to explain what this game is all about. If you're familiar with Yoko Toro's work (Drakenguard, Nier), then you know what you're getting yourself into. If not - Yoko's games are known to push the limits of video game storytelling. They are dark, they are deep, and they are truly mindf*ks. What's important to know is that while there are 4 prequels before Nier Automata (Drakenguard 1-3 and Nier), you don't need to know their stories to really understand the story of Nier Automata. But if you want all caught up in 1 minute, check out this video voiced by the voice actress of 2B (don't worry, no real Nier Automata spoilers): 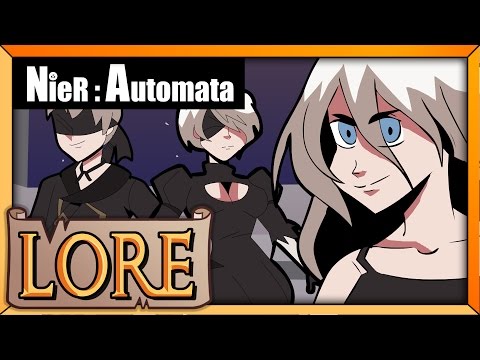 So this is a really unique game. Gameplay wise, it's a mix of 3rd person hack and slash action combined with "bullet hell" SHMUP. You'll have top-down shooter style bullet hell, then you'll have 3rd person action combined with bullet hell, then you'll have straight up combo-driven 3rd person grinding action with RPG elements. It's SUPER Japanese and one of the wackiest gameplay type blends I've seen in a long while. The actual 3rd person fighting mechanics are pretty simplified (you can button mash attack and dodge and basically combo and live forever), but the combination of the two completely disparate styles works well, and creates a super compelling experience.

As far as the story is concerned, this game is a masterpiece. You have to play the game 3 or 4 times before you get the full story, and trust me, once you get to the end and the story all comes together, it'll blow your mind. It left me shook after I finished the "true" ending last night. I can't say much more without spoiling things, so I'll leave it at this - from a storytelling perspective, Nier Automata achieves a level of accomplishment that very few games have managed to aspire to. It's incredibly well written and executed, and if you're along for the ride, it'll change the way you think. It's SO good.

Now, if you're playing this on PC, there are some important things to take note. First and foremost, the game has been out for a year, and it has not received a single patch on the PC platform. It's safe to assume at this point that the game will never be patched. It has some pretty serious PC specific issues, primarily with performance on certain hardware, and straight up crashes and compatibility issues with certain hardware configs. Ask @Ilriyas about his hardware setup - he hasn't been able to play the game due to crashing and other issues. That being said, most PC players have had minimal issues playing the game.

There are some really dumb limitations to the PC version, especially with display resolution. The game is locked at a max of 1080p display resolution. So if you're running 1440p or higher, you'll have gross blurry up-scaling when you place the game. Fortunately, there's a user-made mod that fixes this, known as FAR: Fix Automata Resolution. I played most of the game using FAR, and it is damn near a necessity if you're using a display larger than 1080p. Download FAR here: https://steamcommunity.com/groups/SpecialK_Mods/discussions/3/1334600128973500691/

Even if you're gaming on 1080p, FAR may be worth installing. It includes lots of little tweaks and performance enhancements that'll make your experience way better.

Also, you should probably play this game with a controller. I'm told it can be done with a mouse and keyboard. You'll probably hate your life if you do this. Just use a controller. For yer health.

Anyways, here are some screenshots. Play this game. It rules.